This week marked a historical moment in the history of Project Coach as Red Shirts and Blue Shirts alike welcomed ten students—three girls and seven boys, ages 14-17—from Marseilles, France to take a walk in their shoes for the next three weeks. This cross-cultural youth exchange program, which was sponsored entirely by SportsUnited, a division of the Bureau for Educational and Cultural Affairs of the U.S Department of State, will specifically aim to train the French students how to become coaches for elementary children in their own hometowns as well as foster meaningful discussions and cultural awareness about various issues regarding racism and discrimination in both countries. Yet, Julie Hooks, who is the Executive Director of the Institute for Training and Development (ITD) in Amherst, MA and Project Director of the exchange program itself, says that above all, we can expect the program to build a number of personal relationships between both sets of youth over the coming weeks—not to mention, well into next year when 10 students from Project Coach travel to France for two weeks to participate in similar activities.
Although the France Sports Initiative is the third exchange program that ITD has developed around youth sports since the organization started in 1985, this is the first program that has actually involved the youth themselves in the training process and cultural awareness activities that ITD seeks to traditionally provide for its visiting participants. Indeed, upon hearing about Project Coach’s success with training Springfield youth to coach and mentor elementary school kids from disadvantaged neighborhoods, Julie saw a unique opportunity to build an exchange sports program that would “bridge cultural gaps” as well as provide its participants with practical coaching skills and information about the importance of youth development sports programs.
In the end, Julie hopes that everyone will come away from the exchange with new perceptions about their current ideas of diversity. One of the main reasons she cites that Marseille was specifically chosen for the exchange was because of its “diverse population” since the community has a fairly large presence of northern African and Muslim immigrants. Thus, it is expected that conversations surrounding controversial issues such as immigrant and minority representation within the French community may crop up over the coming weeks. Additionally, there is also a notable lack of girls’ participation within youth sports programs in France, which is unfortunately evidenced by the fact that there are only three girls that were selected by the Marseille Sports Bureau and U.S. Consulate for participation in the exchange program. Julie hopes this observation will also strike engaging dialogue among the program participants and intrigue them to think about the various ways today’s youth can address these and other important social issues through the world of sports.
By Project Coach Reporter -- Danielle Santos
Posted by Anonymous at 6:08 PM No comments:

Will Bangs on how Project Coach led him to teach 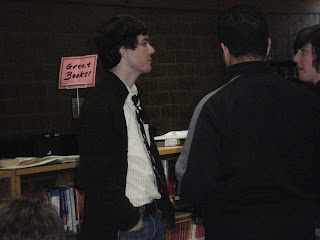 Will Bangs, who now teaches Middle School History and English, was first introduced to Project Coach as a student at Hampshire College when he took one of Sam Intrator's seminar classes. If it weren't for the program, "Sam, Don and Andy", the Project Coach directors, and some of the coaches like Duane, Loeb, Ziggy that he met once he became involved in Project Coach, he would not be teaching today. After graduation from Hampshire, Will went on to obtain his Masters of Teaching degree at Smith College, under the Project Coach fellowship.

During Project Coach sessions, Will helped the Blue Shirts with media production, teaching them storytelling using radio and video through different activities and lessons on Thursday afternoons. The Blue Shirts went through the steps of devising video projects, arranging footage, and interviewing their parents, teachers, and community members. The culmination was a video documented through the coaches' voices, which was sent to a foundation, and who, as a result of watching the video, gave Project Coach a five thousand dollar grant, money that would, in part, go towards the coaches salaries. It was at the point that Will was able to see the tangible result of his involvement in Project Coach.

For his senior thesis, a convergence of education, community organization and video production, Blue Shirts from Project Coach, Sam, Don, Andy and other teenagers he had worked with were brought to his college. Some of the Project Coach Blue Shirts spoke about what being involved in Will's media production projects had meant to them. One coach had been on the brink of dropping out of high school, but in part because of his involvement in Project Coach, he kept holding on, in an attempt to do well in school so that he would be able to obtain a scholarship to persue media production. Project Coach has an "impact on the teens in Springfield but it's also powerful for the college students involved in it". Will is grateful for being in "just the right spot".

Posted by Angela Navarro Fusillo at 9:43 AM No comments:

From Central High to Harvard Law School: PC on the Road

"When are we picking up Sam"? "Which school do we pick up from first"? "Who has the parking pass"?

All part of  the usual conversation in the fast-paced, day-to-day operations of an after-school program with an infinite number of moving parts and a plethora of unexpected challenges to navigate. What transpired for the rest of this afternoon - and most of the evening - was anything but 'normal'. A little less than two hours after leaving the parking lot of Central High School in Springfield, MA, the three Project Coach directors and three of their most promising youth coaches were immersed in an enthralling lecture within the hallowed halls of Harvard Law School.

Thanks to the efforts of Allie Canton (Amherst College alum, 2nd year HLS student) and former Project Coach 'redshirt' alum Arianna Miliotis, current blueshirts Joseph Wray, Kiana Figueroa, and Xavier Rosario were treated to an experience unlike any before, as they became special guests of esteemed HLS professor Charles J. Ogletree, Jr. during a session of the lecture series "Race and Justice". In a unique approach, Professor Ogletree uses topics and scenarios that are dealt with in acclaimed HBO show The Wire to help impress upon students their legal and moral implications. Upon meeting Allie and Arianna, the coaches took their place in the audience, as those present were treated to a soul-stirring recital of the poem "Invictus", amongst other works, by the Young Kings of the Renaissance Charter School in Boston, at the conclusion of which the guest speakers for the evening took their places at the podium.

Heading the panel - as with many sessions during the lecture series - was an actor or actress from the The Wire; on this occasion Sonja Sohn, who plays Detective Kima Greggs. Ms Sohn was joined by the Program Director of "Rewired for Life", a youth development organization located in East Baltimore, and Commander Melvin Russell of the Baltimore PD. Ms Sohn began the panel discussion by describing the inspiring work of "Rewired for Life", for which she - and several cast members from The Wire - devotes considerable time and resources. Citing the need to "reignite the culture of concern in East Baltimore" as the primary motivating factor for her involvement, Ms Sohn described the pressing need for services such as homework help, fitness programs, and community building to help youth and adults alike to see the need to develop relations with those around them. Of particular salience to Project Coach were her remarks around the importance of educating adults in civic engagement to ensure that the values being taught in "Rewired for Life" are replicated and reinforced in the homes of the youth participants.

Commander Russell followed Ms Sohn's impassioned plea for the support of programs such as "Rewired for Life" and Project Coach by describing his twenty-plus years of service to the Baltimore PD in its undercover narcotics division. Wrangling with the notion of retirement after years of frustration at the lack of collaboration between the police and the East Baltimore community, Russell rejected the 'easy path' and decided to devote the remainder of his career to forging better links between his force and local residents, through meaningful discussions around the notions of affordable housing, job creation, and "taking the little, isolated fires of progress" and making one united front for positive development. As a result of these steps, homicides and shootings in the East Baltimore district that Commander Russell heads up fell by a greater percentage than any other district last year.

A moment of particular pride for Project Coach took place soon after, when during the Q & A session that proceeded the panel presentations, Coaches Joseph Wray and Xavier Rosario followed up on an initial inquiry posed by a Boston University professor to ask their own questions of the panelists. Their questions, and the responses from panelists, can be seen below:


However, perhaps the most influential discussion was reserved for the end of the night over pizza, as Project Coach youth quizzed Allie about her choice of career, and the path that she took to Harvard. Coach Joe was particularly captivated by the sense of hard work and devotion that Allie espoused as she debunked the myth that HSL was the sole reserve of the elite and wealthy. Such discussions rolled over into the van ride home, as Joe articulately explained his interest in the legal profession, and the ways that he might go about following a similar route to that of Allie.

Project Coach's sincere thanks go to Allie and Arianna, along with Professor Ogletree and others at HSL for providing us with such a warm welcome!

Andy Wood
Program Director.
Posted by Anonymous at 10:19 AM No comments:

Blue Shirts shouted "2, 3 defense" and "leave some space" at their players from the sidelines. The session began with the players' practicing their shooting, especially free throws, rebounds, and dribbling. About halfway though the session different teams began competing against each other. Player's made some very impressive shots and the Blue Shirts were also able to see what their players needed to work on. A couple of players had finger jams and sat out for a few minutes but soon returned to their game. 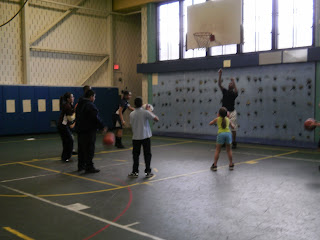 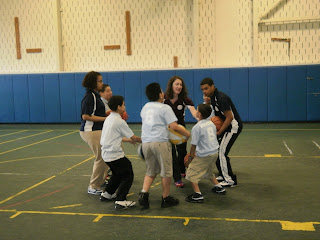 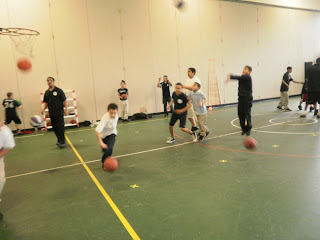 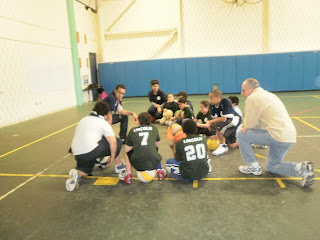 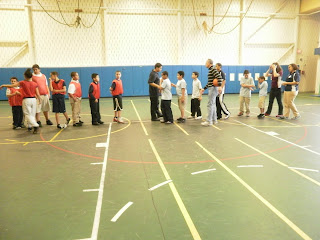 Posted by Angela Navarro Fusillo at 12:42 PM No comments: