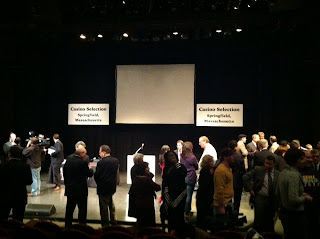 Last night, two veteran coaches (now college students and leaders in the program), one of our graduate fellows who grew up in Springfield, and I attended the Community Forum for the two casinos (MGM and Penn National) who are attempting to build in Springfield, MA. Listening to the proposals was an informative experience, both of our veterans remarked how much they learned about the projects, what a nice job the companies had done preparing, and how exciting the prospects seemed for the city. I was struck by how few of the 300 audience members appeared under the age of 30. As a former resident and teacher in the city of Springfield, I was worried that the youth of the city had not come out to hear about such an important possibility and change. When it came time for community members to ask questions, I noticed that our two young men appeared to be among an incredibly small number of youth in line to ask these companies about their plans, their commitment to the city, and their ability to help Springfield. Yet, I could not have been more proud to see and hear Loeb and Joseph speak about our program and ask about the potential for these companies to support community building organizations like ours.
Loeb Rosario and Joseph Wray address the executives from MGM and Penn National

As you can see in the video, our young men were incredibly poised and well spoken, especially considering the large crowd, the people they were addressing (CEOs and COOs), and the fact that they were one of the first in line to ask a question. What struck me during and after this was that this event was not just important for our program, the possibility of connecting with these casinos, and our never ending quest for a beautiful facility in the north end; this was incredibly important for the two men who took a chance, had a great experience, and supported a program that meant so much to them. Afterwards, both Loeb and Joseph Wray were interview by NECN and Fox 6. A portion of that aired on both stations last night. Furthermore, the Young Professionals Society invited both young men to their next luncheon. In an email this morning, Loeb wrote, "I just really want to say thank you. Thank you for believing in me and trusting me throughout the past 6 years of my life. I know I could count on you all for anything." He continued on to say, "It seriously means a lot to me that you trust me talking about Project Coach to such important people." This solidified my belief that getting our name out, creating an opportunity to partner with these casinos, and promoting Project Coach, did not live up to the fabulous opportunity we had just given these young men. The chance to speak and be received as well as they were was undeniably powerful.

As all of the videos show, the two companies were both eager to discuss opportunities to partner with Project Coach and other organizations developing youth in Springfield. MGM's diversity leader commented how interested they were in organizations that have youth involved in mentoring and developing other youth. Loeb and Joseph were excited by the opportunity in their responses and will be visiting the offices of both companies this week. We are all excited and encouraged and would love to create a partnership with either organization. Stay tuned for more updates on this opportunity!

Posted by Kayleigh Colombero at 8:50 AM No comments: 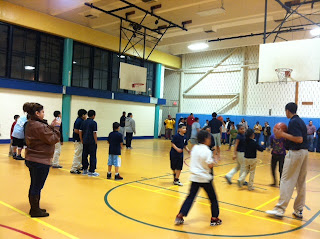 Last week, Project Coach held its first Open House Family Night for the first semester. Planned by our Purple Shirts, veteran coaches in local colleges who have leadership positions in the program, the first Family Night surpassed all expectations. Following our normal Wednesday programming (literacy, sports, and dinner for our participants), a crowd moved from the Gerena cafeteria to the gyms. So many families showed up, that the large hall leading to the gyms was packed with siblings, parents, aunts and uncles, and grandparents. Over 75 parents attended, with and overall attendance around 150 people. The gyms were full of activity including basketball games, volleyball with parents and kids, and PC youth coaches leading games from the week's practices. Walking around the gyms, PC staff were thrilled to see such a wonderful event with amazing attendance happening in the community. 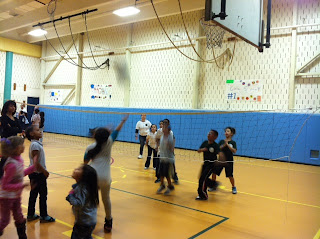 During the activity, our Purple Shirts were getting parents to sign up for an adult North End Volleyball League they are starting. Over 40 parents signed up and received free PC Volleyball t-shirts. Parents also talked with their children's coaches and staff about how much the program means to them and their community. Many parents offered excellent suggestions on follow-up Family Nights and ideas for other ways we could connect to the North End. Meanwhile, the gyms were filled with sports, play, and laughter. Looking forward, our Purple Shirts are already planning a Project Coach Family Carnival Night with more fun games, stations, and other chances to enjoy active time with their children, PC coaches, and other members of the community.

Posted by Kayleigh Colombero at 8:20 AM No comments: