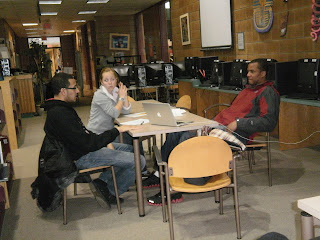 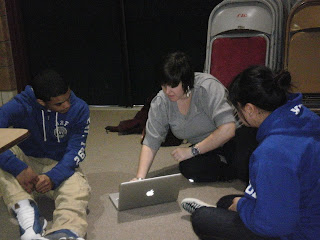 Every Thursday Smith College students drive to Springfield and pair up with Project Coach Blue Shirts to create Project Coach Radio. This week each coach told their own story about test taking, focusing on their MCAS (Massachusetts Comprehensive Assessment System) experience.

Joseph took the MCAS in tenth grade and he describes it as "long, exhausting, frustrating, pointless and boring". He doesn't think the MCAS is an effective way to test students because there are students who are smart, but are not good test takers. When the Smith student who was interviewing him asked if he could think of any alternatives, he mentioned mid-terms and finals, which each school could be responsible for and would directly test the students on what they had learned in class since "many of the questions [on the MCAS] you haven't studied". He found it frustrating that many of his classes were geared towards test taking rather than what he called "life skills". He wants to learn about "what is out in the world, what is going on in the world thousands of miles away that I have no clue about"'; he wants more than just to learn "stuff about tests". Jo has been taking standardized tests since the third grade, and he says that he approaches the recurrent tests with a "man, this again" attitude and doesn't put in his best effort. Instead he just focuses on getting the test done.

John, on the other hand, had a good MCAS experience since he did really well on the test, especially the Math portion. However, he also found the test tedious; when the Smith student he was working with asked him what kind of background music he wanted to use once they had recorded, he responded, "sobbing music". He thought he was done with standardized tests after the MCAS but then he chose to take the SATs. He did find the SATs to be "long and boring" but explained that the scores he received on the SAT measure "how well you are doing, how well you are learning". His goal is to obtain a score of above a 500 in ever section of the SATs. He would prefer to be able to take the test later in the day, since in the past he has taken it really early in the morning.

When Kiana took the MCAS in seventh grade she was afraid she would fail, but her friends reassured her that it was relatively easy to pass. She recognized most of the material on the test because she had covered it in her classes. However, she explained that people can be placed in the wrong classes if they do not have good test taking skills. Just knowing that it is a test makes her nervous. "There probably is a better way to test students, but no one knows how".

Posted by Angela Navarro Fusillo at 9:47 AM No comments: 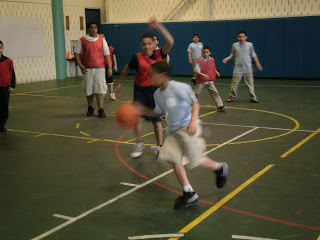 On Tuesday Project Coach began its basketball season. Some Blue Shirts had never coached before. Natasha, a new Blue Shirt, said she was excited and nervous to begin. Before the elementary school players came many of the Blue Shirts and a Red Shirt, Kuna, played a game of knock out. Once the fourth and fifth graders from Gerena, Brightwood and Lincoln arrived they were escorted to different gyms where they met with their Blue Shirt coaches. Each of the three gyms was split in half to accommodate all the players who sat down in a circle to play a couple of name games, introducing themselves to each other. The players then got into a huddle on one knee and the Blue Shirts explained the rules of the games they would play which included Shark and Red Light, Green Light. The Blue Shirts would call out corrections to the players like "when you run, always dribble" during the games. After the games the teams who shared gyms lined up and shook each others' hands. While one Blue Shirt commented that he had trouble with the chemistry between some of his players who had brought their fights from school onto the court, the session ran smoothly.
Posted by Angela Navarro Fusillo at 8:57 PM No comments:

On Monday Aaron Parrish, a Medical Student from Tufts who is working at Baystate, came to Project Coach to give the Blue Shirts some first aid training. Many of the elementary school kids who will be playing basketball this season will complain of jammed finger, sprains, and possibly breaks. Aaron Parrish went through multiple possible scenarios of what could happen and what should be done in each instance. The Blue Shirts then practiced bandage wrapping on each other before finishing off the session by asking Aaron Parrish their questions about being a Medical student.