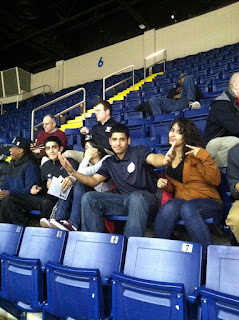 Appreciation, recognition, reflection, and even a little healthy competition – these are just a few words that describe the season’s ending events. We had the opportunity to commemorate the end of a truly remarkable season on two separate celebrations. We kicked off the final week of Project Coach by bringing the blueshirts to Smith College for an evening of games and pizza. The highlight of the night was the long-awaited redshirt vs. blueshirt basketball game! Who doesn’t like a little friendly competition? The energy was through the roof (so were some of the egos!). An hour and a half in, and no one wanted to stop! One thing is for certain-- we work with a highly energetic group of young people, who not only know how to play ball, but how to have fun! 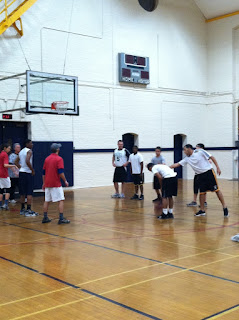 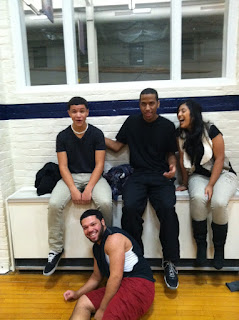 The capstone of the season was our celebratory banquet followed by an outing to the Springfield Armor’s basketball game. Blueshirts, redshirts, teachers, and family members gathered at the Brightwood Health Clinic to begin our final gathering of the fall season. The purpose of the banquet was to recognize the accomplishments of our amazing group of blueshirts and the program as a whole. The redshirts took turns recognizing each of their blueshirts by making thoughtful remarks about contributions to Project Coach. Then the redshirts took the crowd by surprise with a song dedicated to the group of blueshirts. By the end of the event, it was clear that everyone felt we had become a family with members that truly care for each other’s wellbeing.

After the banquet, we left for the Springfield Armor’s game. There wasn’t a person in the arena that could have missed the presence of the Project Coach crew. Our blueshirts were yelling and cheering, showing off their well-developed coaching voices. There were many memorable moments; here is a couple worth mentioning:

Joe, one of our blueshirts, was invited on the court for a shooting competition. As he was waiting on the side of the court, his fellow coaches with loud chanting of his name, “Joe, Joe, Joe”, encouraged Joe!

Colten, another blueshirt, was a dancing machine. He was dancing so wildly that he won the dancing competition at halftime. As a result, everyone in our group got a Dunkin Donuts gift card. To say the least, Colten was very proud of himself.

At the end of the game, we were given the opportunity to meet the coach of the Springfield Armor’s team. Our blueshirts asked thoughtful questions that showed they honestly care about being the best coaches they can be. It was really powerful ending the season with advice and inspirational words from a professional coach.

We are all very excited to continue growing as a group next season!

Posted by Unknown at 3:51 PM No comments:

Building Community in the North End

A week before Thanksgiving, Project Coach hosted a pizza party. Teen coaches, parents, teachers from Gerena elementary school, and representatives from community non-profits gathered on a Friday evening to enjoy dinner and to discuss important issues in the Springfield schools.

We talked about how to help children do better in the North End schools. Colton Stovall, a freshman at Commerce High School, explained his point of view that teachers, parents, and the students themselves have to work together so that the student can do well in school. “If one person doesn’t do his part, it just doesn’t happen.” A father of a fourth grader from Gerena elementary school explained his own educational philosophy where teachers and parents should share ideas to provide the best education for children. Bryant Whitsett, a junior at Putnam High School, emphasized that his best teacher were the ones who communicated with his parents. Some even came to his home, or made regular phone calls to establish a strong connection.

The community pizza party provided a forum to make these connections. Teachers talked to their students’ parents in an informal setting. Parents met and spent some time with the teenagers who their children look up to as their coaches. Teachers, parents, and coaches gained a fuller understand of Project Coach by getting to know each other as the people who can contribute to make the program even better.

Posted by Unknown at 7:22 AM No comments: