On Friday, November 18th, Gerena Elementary School welcomed young adult author, Kevin Markey, with open arms and eager smiles. Born and raised in Springfield, Kevin writes early chapter books about baseball and is a lifelong Red Sox fan. He challenged the students with riddles and let them in on his "3 secrets of writing." Many of the kids were able to get their own copy of Markey's book signed and got to talk to him about their own writing in school. See the video to experience a bit of this fun-filled afternoon!

The Impact of Project Coach in Shaping Student and Coach Identity

Yesterday marked the final day of tutoring before Thanksgiving break. Huddled around a square table in the Chesnut Middle School library, Taylor and I assisted coaches Jon and Loeb put the final touches on their creative English assignments. Their project entailed transforming a simple manila folder into a suitcase that told a story of their individual lives. On the outside, they listed what they considered to be the four most crucial aspects of their identity. Both Coach Jon and Coach Loeb, after the categories of "Student" and "Son" proudly preserved an area on the folder that read, in big black letters, "COACH."

In talking with Jon about why he'd chosen "COACH" as one of the defining characteristics in his life, I began to feel just how profoundly the experience of Project Coach has impacted his sense of self. Next to a skillfully sketched drawing of a coach mentoring a young player, Jon's words spoke for themselves: "Through being a coach, I've learned to be responsible, organized, and mature." It was evident from Jon's carefully articulated thoughts how much being a mentor to young athletes in his community has not only shaped his identity but his intrinsic sense of self-worth and value. "Yeah, I'm a coach-- they look up to me. That's it!" he joked playfully. "When you've got other people looking up to you, that changes everything." Listening to Jon's reflection on his own role in Project Coach has given me pause to take a step back and reconsider my role as a redshirt in the lives of the coaches and players I interact with everyday. It sparked a sharp sense of solidarity between the blueshirts and myself, and the other redshirts in the program-- day in and day out, we all wear "many hats"-- student; coach; son/daughter; sister/brother; friend; teammate; teacher-- we are never just one thing. Hearing Jon so affectionately describe the way being a coach has impacted his sense of self sparked a new awareness in my own role as a mentor figure in the lives of my blueshirts, friends and family. I guess we're always learning something new about ourselves through sharing perspectives with those around us!
Posted by Unknown at 7:54 AM No comments: 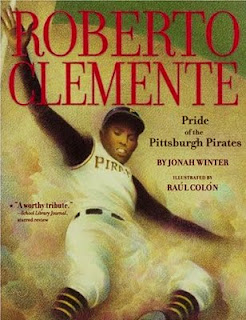 After reading Jonah Winter's book, each class participated in a contest to create a commemorative placard to place outside of Roberto Clemente field, where PC participants gather two days a week to play soccer outside of Chesnut Middle School. See the video below to learn more about the winners!

Posted by Unknown at 8:44 PM No comments:

At its November 10, 2011, meeting, the Sport Management Association invited Project Coach (PC) Director Andy Wood and Assistant Director Greg Rosnick to campus to give a presentation on PC's work with Springfield Public School students in the North End, in a program that utilizes urban high school students as mentors to inner-city youth.  Wood and Rosnick talked to SMA members about the impact of this unique program that leverages sport to promote healthy lifestyles and teach life skills, on both the youth participants and the high school "coaches," 100% of whom have graduated from high school since the program's inception in 2005.  This is a remarkable statistic in a school system where barely half of high school students make it through to graduation.

Posted by Anonymous at 1:12 PM No comments:

Beyond the classroom, off the field, and over the hurdle

“Believe me, the reward is not so great without the struggle”

As Project Coach continues to move forward with our new literacy program, the 3rd, 4th, and 5th graders at Lincoln, Brightwood and Gerena elementary schools in Springfield were introduced to one Wilma Rudolph – an African American track star in the 1960’s who overcame debilitating polio on her way to a career marked by numerous accolades.

On September 7th, 1960, in Rome, Wilma became the first American woman to win 3 gold medals in the Olympics. She won the 100-meter dash, the 200-meter dash, and ran the anchor on the 400-meter relay team. Beyond this, she won numerous awards and other accolades – far too many to mention here.

“I believe in me more than anything in this world”

What does all this mean for Project Coach? For starters, it means that we are exposing inspiring life-stories of minority role models to students, many of whom do not know the likes of Wilma Rudolph, Tiki Barber, or the famed Roberto Clemente – a person with whom the kids share a connection, as the soccer field outside of Chesnut Middle School is named Roberto Clemente Field. More importantly, it showcases to the Blueshirt coaches and elementary players alike that overcoming adversity, disability, circumstance is anything but impossible. Success through hard work and perseverance (a focus word a few weeks back) is always, always obtainable.

Wilma Rudolph's story sparked a lively discussion in the minds of my 3rd graders. They were curious about what polio was (one of them claimed to have it!), what “disability” meant, and why it was necessary to overcome in order to achieve what Wilma Rudolph was able to achieve. I offered a personal anecdote about my own struggles with speech and stuttering, and saw players begin to make the connection between achievement and perseverance –much akin to a light bulb being turned on for the first time. All around it was a magnificent week, and the opportunities to motivate and encourage seem endless.

“It doesn't matter what you're trying to accomplish. It's all a matter of discipline. I was determined to discover what life held for me beyond the inner-city streets.”

Written by Elyse Quadrozzi, Redshirt Graduate Fellow
Posted by Unknown at 6:09 AM No comments: