Family Night: Minute to Win It! 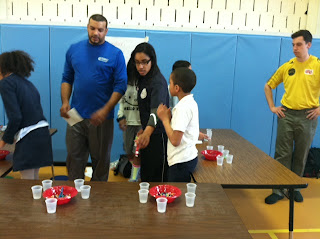 On Tuesday, March 26th Project Coach held another one of our fun and exciting family nights. Planned by our veteran youth staff and Springfield teachers, this night was amazingly successful with a great deal of play, enthusiasm, and relationship building. Modeled after the show Minute to Win It, the Gerena gym was set up with ten stations each with a one minute game or activity. Whether it was kicking their shoe onto a milk crate, separating different colored beads, or kicking as fast as possible to rack up steps on a pedometer, the kids and their families were fully engaged in the whole experience. Families who went to each station or won at least 6 stations got Project Coach prizes including jerseys, bracelets, and stickers. Families also enjoyed healthy fruit and vegetable smoothies provided by our partnership with the Holyoke Community College Nutrition Department. Throughout the whole night, everyone could feel the positive energy and excellent connections between PC families, staff, SPS teachers, and PC teen coaches. 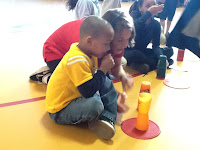 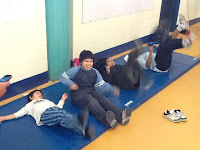 In accordance with the Project Coach model, the majority of planning and designing of the night fell to our veteran coaches who are now college students. They chose the games, planned the set up, made equipment lists and called all of the parents in our program to personally invite them. While it took many hours of planning, their ability to execute an engaging, multifaceted night of programming truly proved their skills as coaches, youth workers, and community organizers. Project Coach believes that this is the most effective model for both youth development and building community capacity. To have teens in the community organizing and running these events speaks to the power of youth and the assets within the North End waiting to be developed. Both the teens and Project Coach staff are eagerly preparing for our next family night on April 30th, knowing it will be a great success. 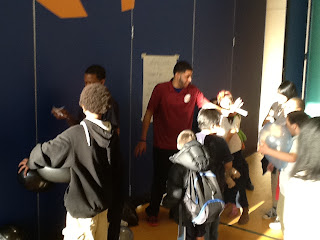 Posted by Kayleigh Colombero at 6:56 AM No comments: 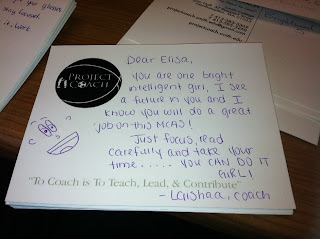 Thanks to a wonderful suggestion from a Springfield Public School teacher on our staff, our teen coaches worked for thirty minutes on Monday night to write all of their players a personal message about taking MCAS tests. As we hope our teen coaches become mentors and role models to their younger players, it was a great exercise in connecting with their players and providing them encouragement outside of the basketball court. Coaches put a lot of time and effort into crafting their messages and providing both support and suggestions. This week, all of the cards will be delivered to the elementary students during their homeroom period before MCAS start. Since MCAS are an important indicator of school and student success, Project Coach wanted to support all of our participants on test day. 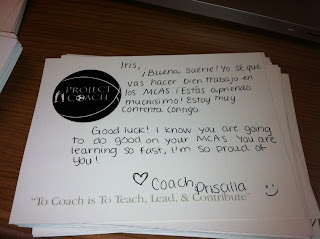 In addition to providing a nice encouragement, having our coaches write messages with suggestions and techniques helps them to think about the importance of MCAS. Many of our coaches are currently in tenth grade and will be taking the tests soon. Since these tests can impede a student's ability to graduate, it was important for our coaches to reflect on what they have learned about taking tests and why they need to try their hardest on each one. Over the last month, tenth grade coaches have been working with their tutors to practice and prepare for the ELA long composition test. However, by working with their players to prepare them for the tests, coaches are more able to realize how important this preparation truly is. Many of the coaches have led sessions with their players to complete practice tests and discuss testing strategies. This multilevel preparation system allows our teens to acquire all of the necessary skills to tackle these tests.

Update: Students thoroughly enjoyed reading their MCAS encouragement cards and many commented to their teachers that they worked harder on the test because of it! In one school, students taped the cards to the front of notebooks and binders to have a continual reminder about how much their coach cares. Since it was such a success, our coaches will be repeating it at the start of math MCAS in May.

Posted by Kayleigh Colombero at 9:45 AM No comments: 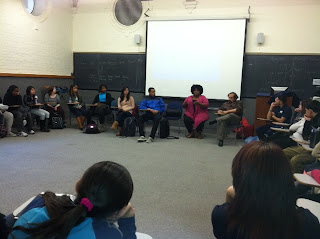 In connection with the youth empowerment movement of Power Writing and the documentary "To Be Heard," Project Coach teens and their Smith College mentors participated in a workshop and film screening on Monday, March 4th. After meeting some of the program's leaders including Amy Sultan, Roland Legiardi-Laura, Pearl Quick, and Joe Ubiles, the teens learned about the importance of literacy in our society. Roland shared the ways that reading and writing ability can predict your future. Students were taught the Power Writers' motto, "If you don't learn to write your own life story, someone else will write it for you." Pearl, a former student in the Power Writers class, shared how the class helped her write her story, get in to Sarah Lawrence College, and move out of her neighborhood. Then, Project Coach students and their mentors were given about ten minutes to write about whatever they wanted. Following this time, a Project Coach teen volunteered to be the Master (the one responsible for choosing volunteers to share and people to comment). Pearl started the sharing with her own poem and then many teens from Project Coach and some staff members shared their writing. The stories ranged from humorous to deeply personal and everyone was celebrated for sharing. Each presenter was clapped in to feel welcome and clapped out to feel they were at home. After twenty minutes of this, the group had experienced an unprecedented relationship building activity and empowerment through literacy.
Following the workshop, Project Coach teens went to a screening of the documentary, "To Be Heard" which closely followed three students in the Power Writers class in the South Bronx. Pearl, who helped lead the workshop, was one of the three main characters in the film. The film was an honest portrayal of the success of youth empowerment as well as the times when students continue to make life altering mistakes. All of the Project Coach teens thoroughly enjoyed the film and the real portrayal of teenage life in America. After watching the film, Loeb Rosario reflected, "It made me think about how I based my life on sports and Project Coach and the characters in the film used poetry to help them live." All of our coaches were inspired by the film and many suggested that we continue to use Power Writing as a part of Project Coach.

Posted by Kayleigh Colombero at 8:59 AM No comments: